You are here: Home » Latest World News » What Stray Dogs Need in Thailand: Family and Love 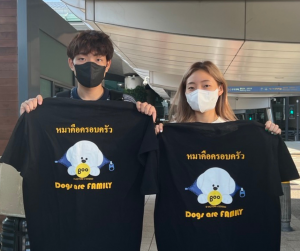 Junwoo Na and Jeeyoon Na campaign to save street dogs.

By Junwoo Na and Jeeyoon Na
Bangkok & California, Sep 30 2022 – When I started living in Thailand, I noticed something peculiar that I had never seen in other countries I had visited before. It was the stray dogs. I ran into so many stray dogs when jogging on the streets.

At first, I was scared of them because they might attack me, as I had read in news articles. Surprisingly, most of these stray dogs in Thailand seemed friendly. Unfortunately, since they slept on dirty streets and drank sewage water, they contracted various diseases such as rabies, babesiosis, inflammation of the lungs, canine monocytic ehrlichiosis, etc. 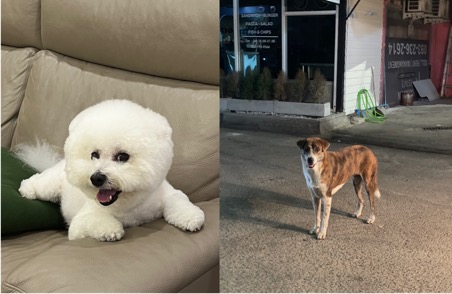 Woods, a little Bichon Frisé, is looked after at home, but stray dogs in Thailand live tough lives.

As a pet owner, I felt they were not supposed to be on the streets. Imagine, my Woods, a little Bichon Frisé, out on dirty streets bitten by ticks and getting rabies! It just breaks my heart. Every time I look at the stray dogs in Thailand, they look like my Woods. And I wondered, “Where do these stray dogs come from? And why do Thai people leave them on the streets?” Then I had a big awakening and decided I needed to help these stray dogs. This is how I began my public campaign and fundraising for stray dogs.

Before launching my campaign, I wanted to get some facts about health-related issues for stray dogs and found that they also affect Thai people’s welfare. Last year, I read a news article about a 39-year-old woman in Surin, Thailand, who died of rabies after taking care of stray animals.  A study revealed that almost 87.5% of dogs in Thailand have rabies and are not vaccinated against the disease. This was shocking to me, especially because getting a rabies vaccine for the dog is the first thing to do when adopting a dog in Korea, where I grew up. Knowing that humans rarely survive rabies infections, many Thai people are concerned about the stray dogs around them carrying rabies. I decided to organize a campaign to support rabies vaccination for stray dogs in Thailand because rabies affects the welfare of dogs and people. 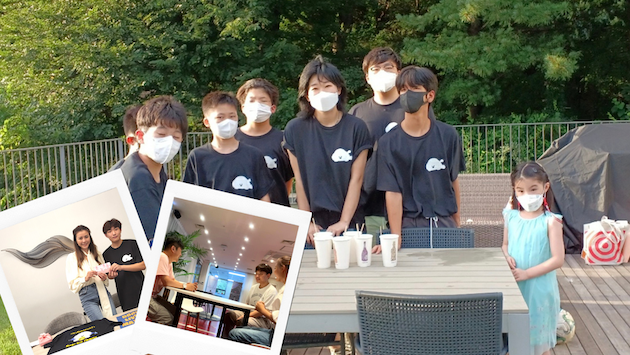 Junwoo Na and Jeeyoon Na’s campaign included meetings with the founder of the Voice Foundation, Chollada Sirisant, and UZZUZZU MY PET’s CEO, Jongse Kim, and fundraising drives for stray dogs.

While organizing the campaign, I found something unique about Thai culture regarding the motivation for raising dogs. Unlike in South Korea, where dogs are treated as life companions for people, Thai people raise dogs to show off their status. As Thai royal families love dogs, many Thai people follow suit. But then, without having enough resources to maintain proper care for their dogs, people abandon these poor creatures onto the streets. And that’s how they end up having so many stray dogs. I realized that without changing Thai people’s minds about dogs, there would be more stray dogs would suffer. My ultimate goal is to spread the message that we have to be responsible for how these dogs become abandoned on the streets, and that, by doing so, we will be able to build a safer community where dogs and humans can happily coexist. The message is clear: Dogs are family. As we need proper health care, they need one too.

So let me talk about my campaign. To spread our message, we designed t-shirts with our slogan, ‘Dogs are Family.’ We also printed out a poster explaining that ‘Dogs’ Lives Matter,’ and that this campaign is for both people and dogs. Thanks to the support from a digital character company, ‘UZZUZZU MY PET’, we could use their characters as a mascot of our campaign.

We also had a very special interview with the founder of the Voice Foundation, Chollada Sirisant. In her interview, she explained that many Thai people are not aware of the money that it takes to keep a dog as a pet. Some people abuse the Buddhist beliefs that value the lives of all animals and abandon dogs at the Buddhist temples.

Even now, there are stray dogs that keep breeding and creating more stray dogs. This is a serious ethical problem, as more and more dogs wander around the streets, where they do not belong, and inevitably become susceptible to rabies. Due to the irresponsible behavior of humans, more dogs are getting in danger, eventually affecting us humans with the fear of rabies.

According to Chollada, adopting stray dogs isn’t always best for them because some of the rescued dogs wish to go back to the street. This means that so long as they get their rabies vaccine and get neutered, Thai people can coexist with stray dogs. Time will play a role in shaping the new ecosystem.  I have seen how animal farms in Korea were reported and brutally criticized on social media, ending the inhumane treatment of dogs in Korea.  I believe there is also hope for a change in Thai culture.

I look forward to seeing changes in how Thai people think of animal rights as more people get motivated and get involved in our actions via social media.