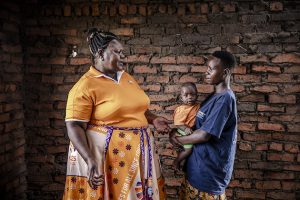 Ricksani Alice, 19, who was married at a young age but is now back in school hoping to complete her education thanks to the Spotlight Initiative talks with UNFPA Gender Programme Officer Beatrice Kumwenda at Tilimbike Safe Community Space in Chiludzi village, Dowa, Malawi on November 2, 2020. Credit: UNFPA ESARO

By Cecilia Russell
Johannesburg, Sep 29 2022 – Child marriage continues to be a scourge in many African countries – despite legislation and efforts of many, including parliamentarians, to keep girls in school and create brighter futures for them. This was the view of participants in a recent webinar held under the auspices of the African Parliamentary Forum on Population and Development (FPA) and UNFPA East and Southern Africa Regional Office (ESARO).

The webinar, supported by the Asian Population and Development Association (APDA) and the Japan Trust Fund, heard how progressive legislation prohibiting marriage for adolescents under 18, and in one case, 21, was not enough to stop the practice.

Dr Kiyoko Ikegami, Executive Director, and Secretary General, APDA, noted in her opening address that the COVID-19 pandemic had affected child marriage prevention programmes and increased poverty and inequality, which was a driving force in child marriages.

Chinwe Ogbonna, UNFPA ESARO Regional Director a.i, said while there had been considerable achievements since the 1994 ICPD conference in Egypt – the work was not yet done.

She encouraged the parliamentarians to commit themselves to actions they agreed to at a regional meeting in Addis Ababa in June, which included “amplifying evidence-based advocacy.” In Africa, she said, teenage pregnancy and HIV prevalence are high. Gender-based violence was on the rise, and femicide and the harmful practices of child marriage, and female genital mutilation continued.

The webinar heard from members of parliament in various countries across the African continent.

Fredrick Outa, from Kenya, FPA Vice-President, told the delegates that while Kenya had made ambitious commitments, FGM was an area of concern. Kenya was committed to strengthening coordination in legislation and policy framework, communication and advocacy, integration and support, and cross-border cooperation to eliminate FGM.

Kenya aimed to eliminate GBV and child and forced marriages by “addressing social and cultural norms that propagate the practice while providing support to affected women and girls.”

An MP from Zambia, Princess Kasune, said it was of concern that the Zambia Demographic and Health Survey (ZDHS) of 2018 indicated that 29 percent of women aged 20-24 reported being married before 18. The country had various programmes to address this, including partnering with traditional rulers and civil society to fight early child marriage.

She said the practice continues even though the Marriage Act prescribes 21 as the minimum age for marriage.

However, customary law differed, and there needed to be consistency in legislation.

The other crucial campaign against early marriages was to keep children in school. While the government had employed 30 000 teachers in rural areas, more was needed.

“Keeping children in school was critical to lowering the incidence of child marriage,” Kasune said.

Muwuma Milton, MP Uganda, agreed that culture played a part in eliminating harmful practices like child marriage. The country was applying a multifaceted approach to eliminating this – including school feeding schemes, providing sanitary packs for girls, and encouraging young mothers to return to school after delivery.

“A challenge is that the country has unmet needs for family planning services, which stands at 30%, and there is a culture that believes that once a girl reaches menstruation age, they are old enough to get married,” Milton said.

Matthew Ngwale, an MP from Malawi, noted that his country adhered to the Southern African Development Community (SADC) protocol that condemns the marriage of people under 18. The Malawian constitution, Marriage, Divorce, the Family Relations Act (2015), and the Childcare Justice and Protection Act all reinforce this policy.

He also noted that child marriage is higher in rural than urban areas. Rural girls are 1.6 times more likely to marry early than their urban counterparts.

Poverty is a clear driver, with women in the predominantly ‘poor’ south marrying at a slightly lower age than those in the ‘wealthier’ north and central regions.

“In Malawi, children from more impoverished families are twice as likely to marry early than those from wealthier families,” Ngwale said, and in a country where data shows that 51.5% of the people live below the poverty line, which is higher in rural areas at 60% compared to urban areas at 18%.

Traditional initiation practices, done as part of a rite of passage when a girl reaches puberty, encouraged early sexual activity, Ngwale said, and the prevalence of child marriage is higher among matrilineal than patrilineal groups.

“Due to food insecurity, child marriage often becomes a more likely coping mechanism as families seek to reduce the burden of feeding the family,” he said.

Climatic challenges, such as droughts and floods, have become more frequent and catastrophic.

“Most young girls who leave school due to child marriage have few opportunities to earn a living, making them more vulnerable to GBV. Child marriage lowers women’s expected earnings in adulthood by between 1.4% and 15.6%,” he said.

However, the Malawi government had created a conducive environment for civil society organizations to work with the government to end child marriage – including the official Girls Not Brides National Partnership.

Pamela Majodina, MP Republic of South Africa, told the webinar the country was committed to the objectives of ICPD25. It has passed laws, including the Domestic Violence Act, Children’s Act, Sexual Offences Act, and Child Justice Act, where it is a criminal offense to have sex with a child under 16 – regardless of consent.

Goodlucky Kwaramba, MP Zimbabwe, said her country was committed to reducing teenage pregnancies from 21.6% to 12% by 2030 and delivering comprehensive Family Planning services by 2030.

An MP from Eswatini, Sylvia Mthethwa, said her country, with 73 percent of the population below 35 and youth unemployment at 47 percent, was committed to ensuring that youth was front of mind. While senators were mobilizing financial resources, the National Youth Policy and National Youth Operational Plan had been developed.

Meanwhile, in Tanzania, some successes were already recorded Dr Thea Ntara, MP Tanzania, said rural areas were fully supported in the rollout of free ARVs, and adolescent and youth-friendly SRH services have been available in more than 63% of all health facilities since 2017.

Note: The webinar series is based on a recommendation of the African and Asian Parliamentarians’ meeting to Follow-Up on ICPD25 Commitments held in June 2022 in Addis Ababa, Ethiopia.